J.L.LE MOIGNE propose the following comparison between the analytic (i.e., applying a reductionnist method of successive decomposition) and the systemic (i.e. using a wholesale approach) modes of modelization (1990, p.9): 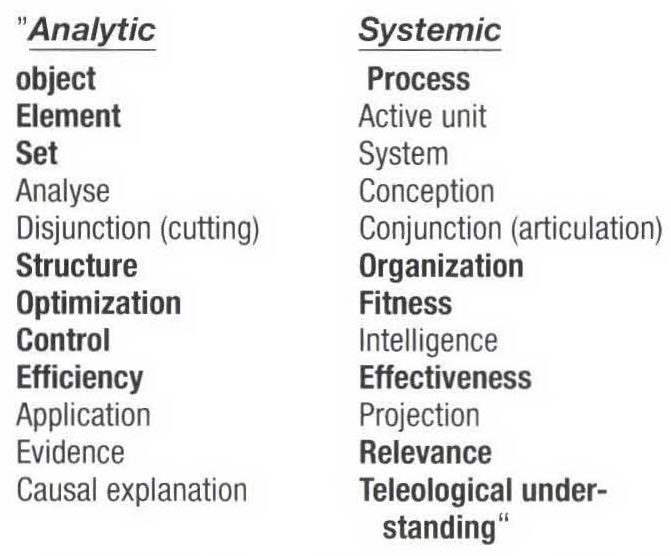 One wonders if the systemic way to "control" is not regulation or still better self-regulation.

Pleasantly, LE MOIGNE argues that cutting a sausage in regular slices can be satisfactory, but that the same method applied to a chicken would not give good results.

D. DURAND describes as follows the successive stages of modelization in systemic terms:

"- Identification and classification of the elements of the system (in order to distinguish) the elements in a number of classes… taking in account (their) dynamic as well as static properties… and establishing a certain hierarchy among them.

"- Defining the relations among the elements… This is usually done by establishing a matrix… which moreover allows to define the direction of the relations from one element to another.

"- Generalization which is the extension to the most numerous possible situations, of a model which has been found valid in a number of observed situations.

"- Induction, a more ambitious operation… which aims at the replacement of one or various given models by one more abstract and more universal one" (1979, p.58).