DAWKINS introduces this neologism as a specific kind of replicator in human culture,"… a noun that conveys the idea of a unit of cultural transmission" (Ibid). The term should have been "mimeme" (as in mimic), but DAWKINS wanted "… a monosyllabe that sounds a bit like gene" (Ibid)

"Examples of memes are tunes, ideas, catch-phrases, clothes fashions, ways of making pots or building arches. Just as genes propagate themselves in the gene pool by leaping from body to body via sperms or eggs, so meme propagate themselves in the meme pool by leaping from brain to brain via a process which, in the broad sense, can be called imitation" (Ibid). N.K. HUMPHREY, a colleague of DAWKINS, summed all this up in this way: "… When you plant a fertile meme in my mind you literally parasitize my brain, turning it into a vehicle for the meme's propagation in just the way that a virus may parasitize the genetic mechanism of a host cell" (Ibid, p.207). Some kind of covert brainwashing!

J.T. BONNER observes: "The thing that sets memes apart is that they are learned by one individual from another, and they are not present in the DNA of the genes. Therefore, if an animal is removed from its mother before birth and raised in the absence of any of its own kind, it will lack all the memes that its family might have passed on, while it will retain all the genes that its parents bestowed upon it" (1988, p.209). So-called wolfchildren are a good example (J.A. SINGH and R.M. ZINGG, 1942).

A culture is characterized by a particular population of memes: a meme pool.

According to S. BLACKMORE a full fledged meme implies more than simple copying some behavior or concept. Three additional criteria should be needed:

"- The message must be accurately copied

- Many copies must be made

BLACKMORE gives the following list of memes and complexes of memes (2000, p.54): 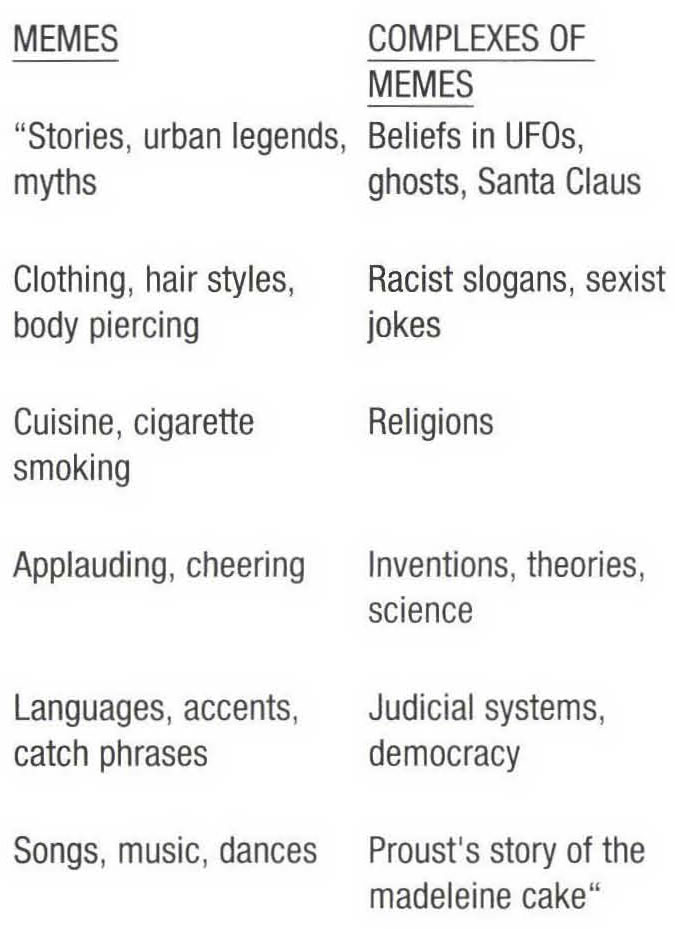