The cutting edge of the systemic approach is thus stated by M. BUNGE: "A systemic approach to any subject boils down to abiding by the principle that every object is either a system or a component of a system. The methodological consequence is obvious: Nothing can profitably be studied in isolation" (1993, p.210).

J.de ROSNAY explains as follows the differences between the two approaches: "The analytic and systemic approaches are complementary more than opposed. However they are not reducible to each other. The analytic approach aims at reducing a system to its most simple constitutive elements, in order to study them in detail and understand the types of interactions which exist among them" (1975, p.109)

A good example is the study of the components of water and the way they associate: HO is one bivalent O associated to two monovalent H, due to complementarity of electronic shells.

"Next, one modifies one variable at once to try to deduce general laws permiting the prediction of the systems properties in very different conditions. In order to be able to obtain such predictions, the laws of additivity of elemental properties must be valid. This is the case with homogeneous systems, i.e. those whose elements are similar and present weak reciprocal interactions. In this case, statistical laws can be applied and produce an understanding of the mass, i.e. of inorganized complexity" (Ibid)

In this dictionary, "inorganized complex systems" are named "composite systems" and their behavior is considered under the heading "Criticality". "The additive laws of elementary properties are obviously not anymore valid in the case of highly complex systems, made of a very great diversity of elements, linked by strong interactions. Such systems must be tackled with new methods, such as those of the systems approach. Their goal is to consider a system as a whole, with its proper complexity and dynamics. By the use of simulation, for example, it becomes possible to "animate" the system (i.e. its model) and to observe in real time the effects of the various types of interactions between the elements" (Ibid) This is done by FORRESTER's Systems dynamics, which is a powerful tool, but has also its weaknesses, for example about the real possibility to modelize simultaneity of effects.

"The study of its behavior in time leads to the determination of rules for action, whose aims are the modification of the system or the conception of new ones. Better than a point by point description of the characteristics of both approaches , it seems more useful to oppose them in a (comparative) table, not starting… a debate about their respective advantages or drawbacks" (Ibid) see table right column

"This table, useful because of its simplicity is however no more than a caricature of reality. This too dualistic representation locks thought up within an alternative, apparently difficult to avoid. Many other comparison points should be mentioned. However, while not exhaustive, the table is useful by defining two complementary approaches, of which one (the analytical one) has been favored in a quite disproportionately large way in our whole education" (1975, p.110)

Within the systemic approach itself, R. RODRIGUEZ DELGADO distinguishes three aspects, as follows: 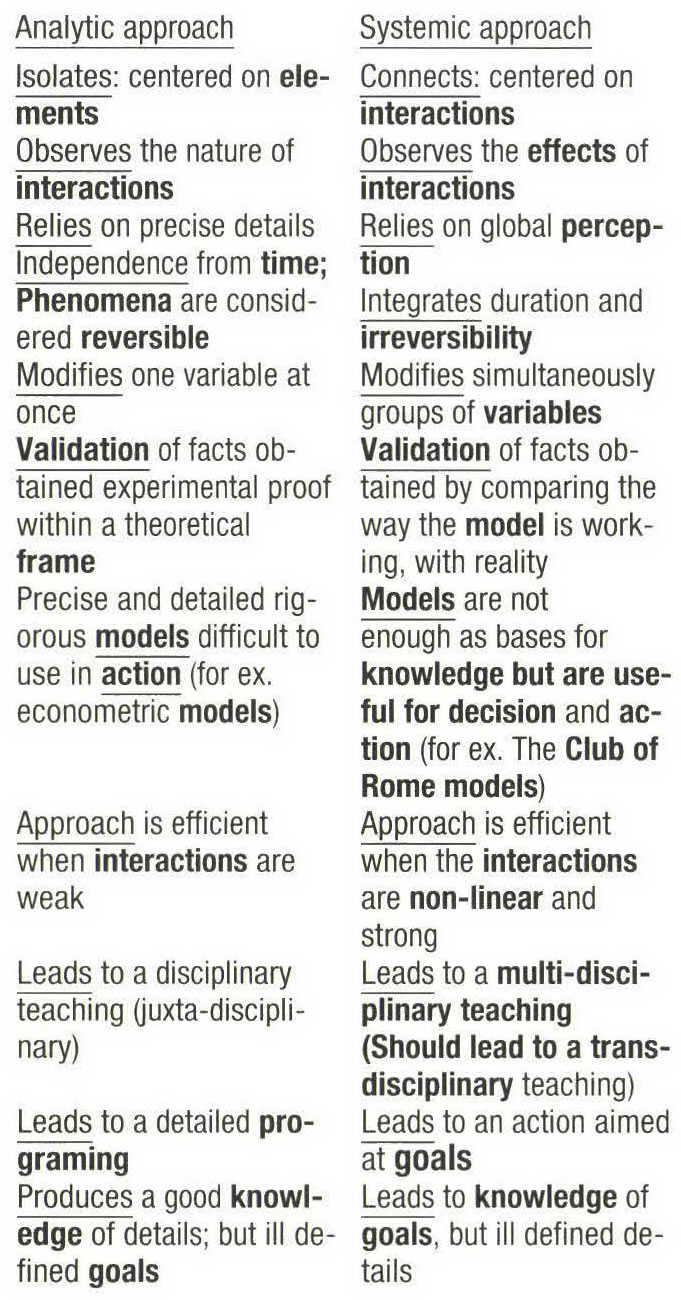 Of course, such positive aspects become possible because of a better previous understanding of these limitations and constraints, some of which may correspond to unavoidable and even in some cases, desirable (while misunderstood) conditions. Let us avoid any triumphalism.